Just where did those Stancils come from?

At 10 years old, my genealogical research started with the STANCIL family of Johnston County, NC. They are my father's family. Thankfully, STANCIL is a somewhat unique name unlike the rest of my family (DAVIS, ALLEN, JOHNSON). That makes the research process just a little easier, although central and eastern North Carolina is nearly overrun with STANCIL descendants, 99% of whom descend from our immigrant ancestor, John STANCIL.

More on John another time. Right now, I'm interested in looking at the origin of the STANCIL name. The name is spelled a myriad of ways - STANCILL, STANSEL, STANSELL, etc. I've even run across a branch of Yankees who spell it STANZEL, though these folks are not born of our STANCILs. After all, they're Yankees.

Surnames didn't exist until about 1000 years ago. They just weren't considered necessary. The world was a much less crowded place and most folks didn't venture more than a few miles from where they were born.  During the Middle Ages, as families got bigger, it became necessary to distinguish between the umpteen Johns in the neighborhood.

Surnames were largely drawn from the father's name: John Peterson, or rather, John the son of Peter.

Or from the father's occupation:  John Shoemaker

Or - in our case - from a particular locale: John Stancil (John from the village of Stancil) 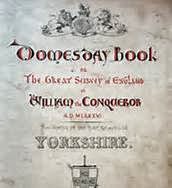 The first written evidence of the


STANCIL name is found in the Domesday Book, which was a census of Here we find reference to " of Stanchil (the "H" was silent), a Saxon."

Some three or four hundred years later, we find references in old tax lists and censuses to  the STANSHALL family, mostly in Yorkshire. Romans occupied the area but headed out around 479 AD. The Saxons moved in about 40 years later. Most houses then were made of mud and straw. But the Saxons found something interesting in Yorkshire - a house made of stone, likely built by the Romans.

It is written that this stone house was the basis for the name given to the village. Stone house evolved into "Stone cell" and eventually even later into Stanshall, whereby the village was named.  To shorten this story a bit and make it a little less dry, it is thought that the name Stanshall developed from this ancient stone house in This village still exists today as the village of Stancil.

The Stanshalls of Yorkshire moved into other parts of , and by the 1500s, you can find a large concentration of 'em in Derbyshire - where our family can be traced. Church and Parrish records of the Church of England contain a number of recorded births, marriages, and deaths of individuals named Stansall.

So there you have it. No doubt about it - we're English. Pass the crumpets, please.