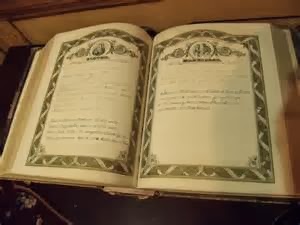 I attended the Family History Fair today sponsored by the NC Archives. Wonderful event!  There I learned of a project underway to collect family Bible  records. It's a great project and I intend to contribute.

Speaking of which...here's a transcription of what's in the Davis Family Bible transcribed exactly as originally written:

The Bible is covered in a red fabric and is in poor condition. Many of the pages are loose and have been re-inserted incorrectly. The binding and glue on the spine of the Bible has disintegrated. These handwritten entries are on pages in the center of the Bible. Most are on pages with headers (Marriages, Births, Deaths, Names) and elaborate artwork. Only one page was originally a blank page, but it was used to record family births and deaths.